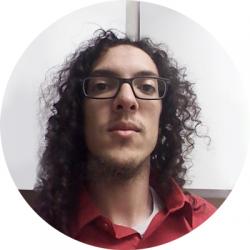 Keliomer Castillo is first and foremost a learner, interested in how coworking works and how to apply it to the things he loves to do: running, reading, writing, and creating music.

A New York-based musician and DJ talks about metaphorically hunting zebras and the effect of collaboration on his music career.

John Hamilton (John Hamilton Hodgson, III) is a DJ whose music career has taken him around the world to collaborate with artists and musicians.

He recently worked with musician j.viewz on the insanely creative “DNA Project” that was successfully funded recently on Kickstarter. They tested out the initial idea with audiences at a number of coworking spaces in New York, which is how I came to meet him through a coworking friend.

I was quickly drawn to his work and was particularly curious as to how a DJ – typically a solo type of musician – was also a coworker and worked on most of his music in collaborative workspaces. I spoke with John briefly in December.

KC: Why do you cowork?

John: Coworking is uniting and hustling with others who may not be working directly with you, but who are on a similar mission. Like a troop of lions who work together to take down a harem of zebras for lunch.

Camaraderie is a useful tool as a freelancer. I am lucky to have experienced it from a young age.

What I’d call my earliest coworking-type memory was when I was ten years old in Sacramento with my brother. We started a car washing business on our street. We each had different roles and often enlisted the neighbors in our adventure. In high school, I applied those early business lessons when I turned to DJing, which I was becoming more interested in.

KC: How does collaboration in the studio differ from more traditional coworking? 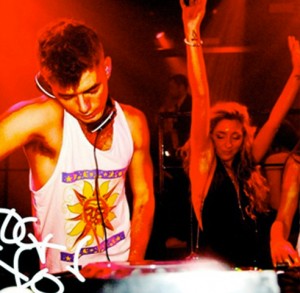 John: Moon Lab Studios, where I do most of my work now, is housed in a building with multiple other studios, and everyone under that roof is a producer, or a DJ, mix engineer, instrumentalist, or some combo of that. It’s clutch to have a neighbor who is doing similar stuff, and the only difference between our studio complex setup and more traditional coworking spaces is that we’re focused on music.

It also provides direct contact with potential fans, business partners, and those you can learn from. Networking can only take you so far – the next step is actual collaboration on things, based on my own experience.

KC: What are your most memorable collaborations?

John: My most memorable early collaborations would have to be with a charismatic gentleman named Jeff DeFazio who started Double J Entertainment with me in Sacramento, CA when we were in high school. He and I DJed school dances, quinceañeras and house parties. Working with j.viewz has also been very memorable, especially going on tour in India with him. One of my first coworking collaborations was with the artist/producer Chino Maurice; he gave me my first taste of music and live performance production here in the city when I was 19 and at NYU.

KC: How was it, working with j.viewz on the DNA Project and campaign?

John: I had many roles: confidante, motivator, apprentice. There was a lot of research and planning involved leading up to the Kickstarter campaign. With Jonathan and our team, I put together and gave presentations, set timelines, reached out to anyone interested, and tried to make sure we always knew what we were trying to accomplish on any given week. I also brainstormed with Jonathan, which is always a lot of fun. We launched the site last month and I am very much looking forward to the evolution of this baby.

KC: How has coworking or collaboration influenced how you approach music?

John: There is no doubt in my mind that once I learned to collaborate with others on music – versus just working solo – I started learning a lot faster. Producing music in a soundproof room all day can make you a bit spacey, so having a partner along for the journey can help you stay in touch with reality. I do a lot of my work solo, but collaborating with others is golden. It doesn’t feel like work: you’re just hanging out, enjoying yourself. It is important for me to recognize and often adopt others’ working habits. It provides a fresh perspective that can potentially help my own work.

KC: How do you keep working with others from becoming distracting?

John: While I love to brainstorm and imagine the direction that my work can go, what makes my work approach unique is that I am disciplined and thorough. I create timelines. I am honest with myself, and those I work with, about the amount of work that needs to get done.

I have a routine. I wake up, make breakfast, and think about what I want to get done that day. I go to the gym and then head out to Moon Lab Studios in Greenpoint. I get all of my non-music things done, plot out what’s to go down the following day, and then I pick up on whatever music projects I am chopping away at, which as of late, have been dance remixes. I’ll work at Moon Lab into the night before cruising back home.

I used to dive into too many projects at once – NYC can be a very distracting place – but I’ve learned from past experiences to stay focused. It’s important when you’re working to set goals and stay focused.

KC: What are you currently working on? To what degree is collaboration affecting the outcome?

John: Since taking a break from live performances, I have dedicated my time to production. I want to hone in my own sound and give people a taste of me. You can have an idea of what you want to sound like, but the beauty of collaboration is that through working with others, other parts of yourself that you didn’t know about will shine through.

KC: Do you have a personal mission statement?

John: To do what I love and take care of those around me.

Keep an eye on John Hamilton throughout 2015 as he plans to release new material. He recently released a slick remix of Nick Vins “Am I Wrong” with Yellow Shoots and will be working with Dear Derrick and Bl’eve Brown, two other NYC based artists, on a radio show.