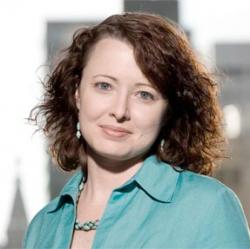 Beth Jusino is a writer, editor, teacher, and marketer in Seattle, Washington. She works from Office Nomads.

“There’s a bad joke: The engineer asks ‘how can I build that?’ The scientist asks ‘how does it work?’ And the philosopher asks ‘do you want fries with that?’” —from The Unemployed Philosophers Guild

That same joke has been made, one time or another, at the expense of most of us who studied humanities or social sciences. But the field of philosophy can seem even more farfetched and disconnected from twenty-first century life. After all, how many professional philosophers do you know?

Well, now I know one. When a Twitter connection mentioned that he knew a philosopher working at Coworking 0711 in Stuttgart, Germany, I had to follow up. Who could be better for a coworking Odd Jobs column? In a world that’s run by a series of 0’s and 1’s, is there a place for Derrida and Euclid?

Marga Biebeler proves that the jokes about unemployable philosophy majors aren’t fair. Smart, educated, and very much in touch with the modern world, Marga tried a traditional career as a company employee in the private economy for five years. She then chose to take the plunge into self-employment four years ago, embracing her love for humanism and reflection. Ever since, she’s made her own career as a professional twenty-first century philosopher. Part personal coach, part project manager, and part facilitator, her work is a great example of an emerging trend toward the independent, flexible career path.

She was gracious enough to chat with me in English (her second language, but my only one) after a long day.

BJ: Marga, one of your colleagues introduced you as a philosopher. Is that what you say your job title is?

MB: A difficult question already! From time to time I change my opinion about how I would describe my job. I can see that it’s something unique; it’s really something different than other trainers or consultants. But I am not an academic philosopher, and sometimes when I say I am a philosopher, people interpret it as something I don’t mean.

BJ: So what do you mean?

MB: I would say philosophy is one tool or one resource, but not the target for me. I studied philosophy at university, and philosophy for me is a place, a room where we can grow without limits. Can you follow, more or less? 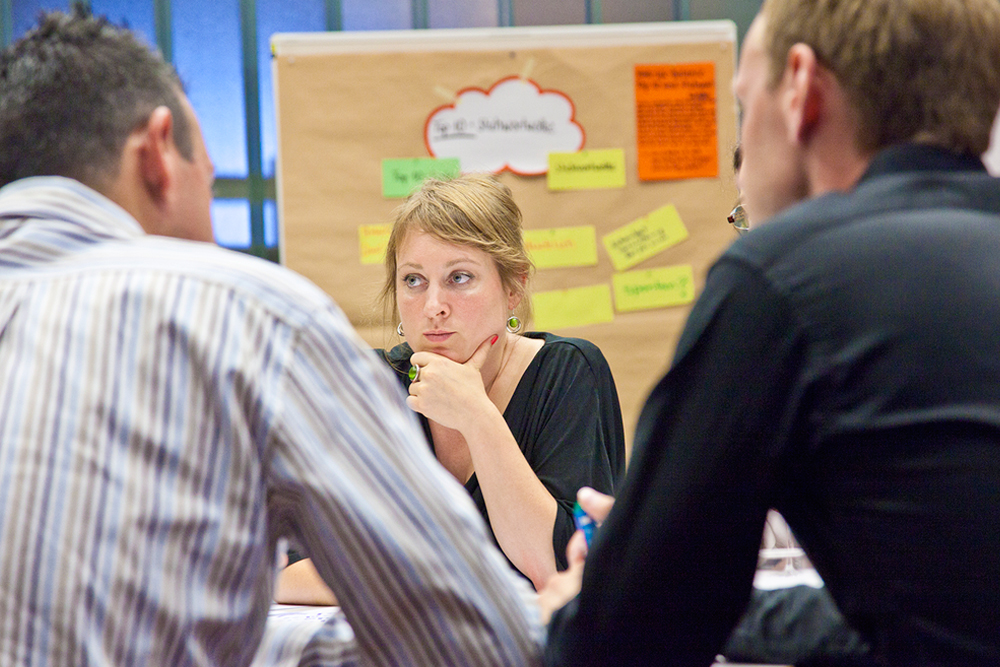 BJ: Yes, I can. So you use philosophy in your work, which sounds like it involves a lot of coaching. Do you work more with individuals or with companies?

MB: Well, in the beginning, I thought I would work mainly with individuals, but if I review the last three and half years, I work more with groups. I work with groups in companies and at the university, and I work in the cultural sector with theatre. It’s really very mixed.

MB: I can’t quite answer because there really isn’t a typical day. I try not to start by checking emails, but to start with something creative, so perhaps designing part of a training. Today, for example, I wanted to write the promotion of my next saloon. I have something that is called “Philosophical Saloon…”

MB: Salon? It’s like a club… a little bit more elegant, thoughts on a higher level. It’s in the evening, there’s no coffee, but there’s discussion and moderation and in the end, you can have a glass of wine or something like that—but just at the end. For philosophy, it’s better not to drink alcohol until the end.

BJ: Definitely not a saloon, then. Where does the group come from? Do you invite them?

MB: It’s open to the public. Anybody can come who knows about it from the newspaper or from the web or from Facebook or whatever. I prepare a subject and I give philosophical input; I explain central positions of a topic, and afterwards, I do the moderation. I don’t want to teach people to how think about love and about health and about friendship and about growth. I want them to reflect on what they think and how they want to understand things and to change opinions within the group.

The salon is something I’ve done for nearly four years. It is my baby, if you want; it’s my birth as an independent philosopher.

BJ: Is being a philosopher something you always wanted to do?

MB: Well, I worked for two years in Spain [for a fruit and vegetable exporter]. And here in Germany, for three years I worked in a web agency and in several other positions. After five years, I wished to go back to what I studied and try to do something with it. A friend of mine told me about coaching, and she said that she could imagine me as a good coach. And at the same time, I knew Harald Amelung [from Coworking0711] and he was just organizing StartUp Weekend. I thought that was interesting and I took part, and I got in contact with the start up energy. I think without coworking and this new way of connecting people and sharing knowledge and things like that, I wouldn’t have got very far.

BJ: And so you’ve been coworking for those last four years?

MB: Yes. I’m not there constantly, but I go there depending on the jobs I have to do. As a philosopher and also as a coach, a trainer, I need books and I need material and I need space, and sometimes I really need calmness, no noise. But I like to go there and enjoy the group feeling and the openness of the people.

BJ: So in addition to your time with books, I know you spend a lot of time with people. As a coach, what’s the difference between what you do as a philosopher and what a psychology-trained coach would do?

MB: Good question. I’m not sure about the answer. I involve a large history of reflection about issues, about topics. I can think about things that are important to us from very characteristic points of view, and I can say, “Well, Kant has a perspective on that.” Psychology, philosophy… In both disciplines, we don’t have really a foundation. In philosophy, the foundation would be a large history of discourse, so I offer this discourse.

BJ: So psychology is more focused on the inner person, while philosophy might focus on the body of knowledge beyond? Or is that simplifying it too much?

MB: Both are about the inner person, but psychology perhaps tries to focus on the person himself, and with philosophy perhaps you try to assure people with input from a broader knowledge base. It’s a little bit like religion. You get in touch with something that is deep inside you and at the same time is outside of you. There’s also tradition, there are experiences that have proven valuable for a very, very long time.

BJ: So philosophy gives you the history, the long perspective.

MB: Yeah, I can take very thick books and say, “There’s so much of what people have thought about love, or success, or what is important in life,” and I can try to take these opinions and material and offer it for discussion. They’re something like external authorities.

BJ: I understand that, the external authority part.

MB: We are in a time now where traditions, ideologies, religions and all these things are so reflected by our minds and in science. So we killed all the ideals, we killed all the gods, and now we are missing somebody, or we are missing orientation that tells us what is important in life and how to live, and what we have to get back is not only trust in ourselves, but also trust in external sources.

BJ: So is that who seeks your services? People who feel like they’re missing something?

MB: I would say [it is mostly] people who are working with people. Trainers, therapists, psychologists, leaders, etc. I think trainers and psychologists who work for twenty years with people get to a point where they have lots of questions, because at the end we don’t have answers for everything. Nobody has answers, but they come to me and say, “Philosophy has to have more answers than we have.” That’s a big hope. I think philosophy, psychology, coaches, should all talk more together, should work better together, should collaborate, cooperate. I think what we really need are discourses. Just to have something like once a month, a salon, such an evening, [where you] share your ideas and get new ideas from other people. It’s not just about the information, but participating and sharing and being together. You know what I mean?

BJ: It sounds like it is this bigger idea of sharing together and creating that community.

MB: You know the translation of “philosophy,” what it means? The Greek concept philosophia is translated as “love of wisdom” or “love of truth.” I think sometimes we may value the notion of truth but ignore that it is a pursuit. We focus too much on getting answers when I think what we should do is cultivate the love of involvement in something. Be involved in something. And philosophy is different to other sciences… it’s something like a big chat room, a chat room outside of space and time.

BJ: When you take this idea back to the practical, everyday, how-you-spend-your-days, what is the most unusual thing you’ve been asked to do as part of your job?

MB: I don’t know if you’d think it was exotic, but I really was very deeply touched when I officiated a wedding. I had the power of attorney to put together two people for the rest of their lives. And in the power of love, I could do that. 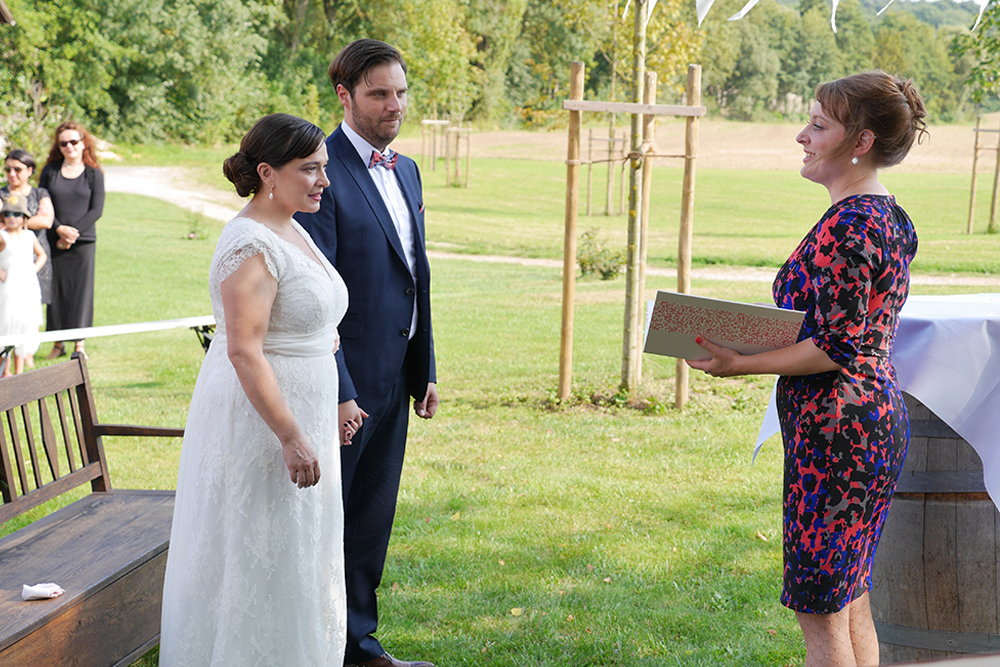 Another unusual [story] is, for one of the salons, I made the room completely dark. This was very intense, because when people can’t see anything, they change their behavior and it changes the discussion completely. They hear better. People that normally talk a lot are very dominant, but when you take away the light and people can’t see each other, perhaps they don’t say anything. Then those who are more shy start to talk.

BJ: Those are unique experiences. You’ve created your own special corner for a career, Marga.

MB: I think I’m still evolving this business. I’m still experimenting. For me it’s difficult. I’m not a good solo fighter. I’m better in teams, and thinking about my business I have lots of ideas, but what I really want to do isn’t so extraordinary. What I really want to do is help people in being better at what they are already doing. But I don’t consider myself so exalted. I don’t want to be understood as esoteric or something like that.

You know, this is why I told you philosophy for me is not a target. I just want to help people do their jobs as long as they like their jobs, and if not they should change. I want to give them back their open mind, their creativity, and their belief in themselves and in cooperation.

Find out more about Marga Biebeler’s philosophy practice, her salons, and more on her website: www.margabiebeler.de.