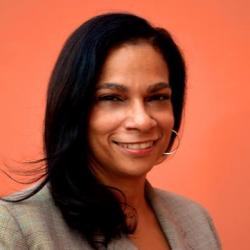 Ann Brown has been a freelance writer for more than two decades. A born-and-bred New Yorker, she has a B.A. from New York University and now calls Praia, Cabo Verde, home.

Imagine working from an island destination, where the beach is just a seashell’s throw away. For seven years I did just that. I relocated from New York City to a city called Praia, the capital of Cape Verde. Cape Verde is a group of ten islands off the coast of Senegal in West Africa, and as a freelance writer, as long as I had my computer, I could work there. So I moved.

When I explain it that way, though, it’s a bit misleading. Working remotely in a foreign place is not that easy, especially in a developing country.

It takes a certain type of personality to work remotely from an international destination. If you are adventurous, organized, flexible, and patient, working remotely could be a good way for you to live in some of the most beautiful destinations in the world. But before you start daydreaming, there are some issues to consider.

Consider, for example, the potential language barrier. When I first arrived in Cape Verde I didn’t speak the official language (Portuguese), let alone Kriolu – Cape Verdean Creole. Luckily, a growing number of people there are learning English, and I found ways to communicate. But it was always a struggle. You will have to deal with finding an apartment and getting your electricity and Internet turned on, at a bare minimum. Knowing some phrases is essential from the beginning, and learning what you need to know beyond that should not come as a surprise.

Working outside of the U.S. will take some major adjustments, some mental, some physical. If you are headed to a developing country like the one I relocated to, be ready to leave a lot of modern conveniences behind. The lack of, say, hot water, will affect you personally. But don’t let it affect you professionally. I got used to cold showers pretty quickly. If you’re used to warm showers every morning, you’ll be in for a change – not just in routine, but in attitude. Adopting a go-with-the-flow mentality is imperative.

No matter what, you’ll be facing some marked changes to your daily routine. One way of dealing with this is to approach it as an opportunity.

Tom Mitchell has lived in Lisbon, London, and Bali. As he sees it, working from international destinations gives him a chance to declutter. “It’s a time for self-reflection and finding purpose,” he told me. “Every time I set off to live abroad I leave with only one suitcase of essentials. Shedding all the meaningless ‘things’ and comforts of home we come to rely on in our everyday lives is so freeing and always reminds me of what is important in life.”

If you hail from a fast-paced place like New York like I did, getting used to the pace of life in another country can require a lot of patience. Don’t expect to live, play, and work like a local from the jumpstart. In Cape Verde, for example, they close down every day for 2-3 hour lunches (though this is slowly changing). This meant that if I needed something from a store, no matter how important (like a new power adapter), it was on hold until after lunchtime. It was beyond frustrating at first, but I learned to do most of my errands early in the day. I appreciate now how it made me be more organized and better at time management.

Most likely, you will be working in a different timezone than your colleagues. This can have its advantages. Being three hours ahead of my editors in New York City gave me an opportunity to finish up work before they even headed to the office. On the downside, I wound up working late hours answering emails sent to me at 5pm EST (8pm my time).

Living in a foreign location, you’ll also miss out on networking with your industry colleagues. Even if you think you don’t do much networking now, just wait until you’re on the other side of the world. It will be important to be able to do face-to-face video calling via Skype, FaceTime, and even Facebook. Connect with those in your field via social media. Join Google+ and LinkedIn groups. Just because you’re far away doesn’t mean you’ve fallen off the map.

Since you will be staying connected via the Internet, make sure your destination has reliable connections. The Internet in Cape Verde was very expensive and unreliable when I first moved there. Now, due to competition, it’s become much cheaper and more steady. But in the beginning, I spent a lot of time working outside at free WiFi spots to save money. I would have a coffee in the square every morning where there was a hot spot and did a few hours work before heading home to work more.

Speaking of reliability, having electricity is a must. In many places, it goes without saying, but in the developing world, less so. During my early days in Cape Verde, blackouts were frequent and sometimes lasted hours. One of them lasted for days. Luckily, the country has improved their electrical grid and became more reliant on wind power. But during blackouts, I would have to grab my laptop and Internet stick and head to a restaurant with a generator where I could plug in and recharge. To meet my deadlines in the U.S., I had to become more resourceful and flexible.

For all the talk about working remotely, one thing that I don’t see mentioned much is how to get paid remotely. It’s not always straightforward. Most likely, the U.S.-based company you are dealing with will not want to make international transfers. You might assume you can receive money using services like PayPal. Unfortunately for me, PayPal didn’t work in Cape Verde, as the company told me it deemed West Africa as high risk. I often had to rely on money transfers and high-fee bank transfers. It is a good idea to keep a U.S. bank account and have your payments sent via direct deposit. If you no longer have a permanent address in the U.S. to keep a bank account going, find a way. Use a trusted friend or relative’s address if you must. Online services like PayPal and Venmo aren’t available everywhere.

One bank to consider is Charles Schwab; they offer ATM usage worldwide with no fees if you have their online checking account. HSBC also has special offerings for expat banking.

While you’re away, some things will probably fall to the wayside. For me, it was my credit score. As I had been living in a no-credit-card country, I had not used my credit card at all, except to arrange travel. I even had some lines of credit canceled due to lack of use. I didn’t think much of it, but when I returned to NYC to set up a base for half of the year, my credit score was a major obstacle.

Your new life in a foreign country will occupy most of your thoughts once you arrive there. That means the best time to organize these things is right now.

Keeping all this in mind, if you are still itching to head out to a far-flung island destination like I did, go for it. The beach is waiting.