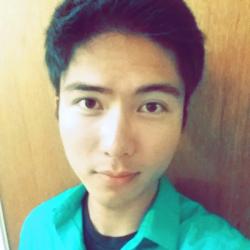 Lichen Han is student and writer based in San Francisco. He's on a quest to collect letters; so far he's acquired a B.A. in computer science, is chasing down an M.F.A. in creative writing, and has his sights set on a J.D.

San Francisco’s Noisebridge is an iconic anarchist hackerspace. Founded in 2008, it was one of the first in the U.S. and has grown to influence hackerspaces around the world. The legacy of Noisebridge’s hundreds of members is evident, from the space’s beautiful murals to its in-house organic mushrooms. Projects in the space have ranged from brain wave-controlled wheelchair robots to large weather balloons that have been sent into the earth’s atmosphere to take videos and measure barometric pressure. This hive of activity is officially leaderless – and proud of it.

The community operates on a single rule which encapsulates the philosophy and governance of an anarchist hackerspace: be excellent to each other.

Mitch Altman, a self-labeled introvert and geek, co-founded Noisebridge with a strong vision for an anarchist culture. The founding team of friends wanted their community to be free and empowering with no absolute leaders. Instead, people would self-organize to make things happen in a “do-ocratic” manner that sings in the same key as the do-it-yourself hacker ethos. The space would be open to everyone willing to contribute to the community whether that means helping others with their projects, teaching classes or participating in weekly discussions as an official member.

This openness in culture and minimalist approach to organization were contributing factors to Noisebridge’s early popularity. But while Altman values the anarchist anatomy of Noisebridge, he has also witnessed firsthand its possible downside. For a short while during its eight-year history, Noisebridge suffered a dark era that nearly resulted in the end of not just their space but their entire community.

The Occupy movement of 2011 was attractive to many Bay Area hackers. During the movement’s heyday, members of Noisebridge would host hack nights for Occupy-related projects and to cross-pollinate ideas on common ground. The movement operated on principles of openness and social empowerment, but within its largely impassioned ranks were some opportunists. By 2012, the fiery era of Occupy had cooled down and the hangers-on began to drift elsewhere. Some blew into Noisebridge like a cold draft on a wintry day.

The sudden influx of the flotsam and jetsam proved to be problematic. While Noisebridge had no qualms with welcoming drifters and the homeless into the space, and was pleased to do so provided they contributed to the hacker community, some of these new folks coming from Occupy camps to Noisebridge had their own intentions. They began to consume Noisebridge from the inside, stealing tools and leeching off resources. Some were openly hostile and made misogynistic comments; when confronted, they would excuse their behavior under the guise of being a first-time visitor. When asked politely to leave, some became vindictive and broke equipment.

Within months, Noisebridge shifted from being a cohesive community and a safe space for creative pursuits to a dingy, chaotic free-for-all. Its culture was at risk of being undermined from the inside. Altman recalls, “We were all wondering whether Noisebridge was going to survive at all. It was a very serious discontinuous jump in the people who didn’t belong, and in an anarchist organization, how do you define who belongs and who doesn’t? Up until then it had worked well for us for years to leave that question open-ended.”

In an attempt to stabilize the culture and regain what was lost, a few members precipitated a bold takeover of the board of directors. They hoped to override the anarchist system in favor of democratic majority rule. It turned out their well-meaning actions backfired and further aroused the anger of the disaffected general membership, many of whom had stopped coming to the space. A rift formed between those who felt they had a place at Noisebridge and those who didn’t.

Ironically, the solution came in the aftermath of an act of vengeance. A displeased individual who had been made to leave ended up contacting the local authorities to report Noisebridge for violations of safety standards. Subsequent inspections proved the claims to be false, but in the process reminded Noisebridge of electrical work that needed to be done for some time. 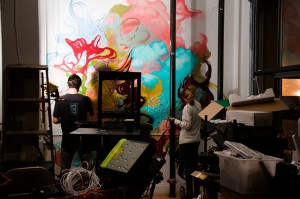 The need for repairs turned out to be a call to arms for the membership, summoning them to do-ocratic action. Noisebridge members decided by consensus to shut down the space for a period of time in order work on the infrastructure themselves. A successful Indiegogo campaign raised the necessary capital and the project attracted back many of the members that had left.

The project took an entire month to complete. When Noisebridge came out of the “Reboot,” as it was called, the space was reinvigorated with fresh murals on the walls, re-sanded floors and improved electrical systems. The members also found their footing with each other again. The worst was over and Noisebridge had survived. The experience strengthened what Altman calls Noisebridge’s “cultural immune system” – its ability to keep the kinds of people that belong and to identify and reject those who do not.

Officially a 501(c)(3) nonprofit, Noisebridge has officers and a board of directors, but under their bylaws the board of directors is designed to rubberstamp the consensus decisions of the members. Ultimately, while the officers and board of directors have important responsibilities, power rests collectively in the hands of Noisebridge’s membership. Decisions that affect the collective (i.e., putting up a new sound-proof division between workspaces) are done by consensus. At weekly meetings, any member can initiate a block on a proposal they don’t want to pass. According to Altman, however, in an environment of healthy consensus such as the one at Noisebridge, blocks rarely occur because proposals will either evolve and adapt to the greater satisfaction of everyone or will ultimately be dropped in favor of an alternate plan initiated by interested subcommittees.

Admittedly this process can be lengthy and conservative which is why pumping through the anarchistic vein of Noisebridge is the constant flow of the do-ocratic lifeblood that sustains creativity.

In the do-ocractic tradition, people are empowered to go ahead and simply do things that they feel align with the principle of excellence. Noisebridge members have decorated the walls with murals and 3D-printed objects, started new classes (past examples include cooking, programming, soldering, Spanish and Mandarin) and have furnished the space with original workbenches and bookshelves based on the Fibonacci sequence. The space even has a darkroom.

Noisebridge even has a unique door access system that different hackers have contributed to developing and expanding. People can enter the space in several ways including punching a key-code into a donated pay phone downstairs, obtaining a physical key from a Noisebridge member like Altman (who hands them out on his travels), downloading the official Noisebridge app, or scanning the RFID on their clipper card. These novel methods exist because people took initiative to create them. The only caveat to do-ocracy is that people must be prepared to change or undo something if objections arise and those objecting must also help in the reversal process.

Generally, anarchy has served Noisebridge well both structurally and financially. Hackerspaces are sometimes funded commercially by charging for classes, workspace or the use of certain tools. Noisebridge, however, maintains a budget of around $70,000 a year – fairly small for its size and location – and is supported primarily through membership dues and donations. This includes fundraising and lively rent parties that date back to the early days when Altman and his friends simply passed a hat around to collect enough funds when they needed to hire a lawyer. 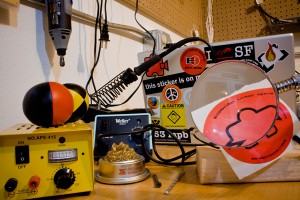 “There’s more than two thousand hackerspaces listed on hackerspace.org,” says Altman, “and all of them are unique because they were founded by unique individuals and different groups based on their own sensibilities. Of course, they draw on the examples of other hackerspaces. They see what works well and what doesn’t work well for the other spaces so they can decide for themselves what they want to try.” Sudo Room in Berkeley draws influences from Noisebridge’s anarchist model. Ace Monster Toys in Oakland was founded by one of the original co-founders of Noisebridge though it does not utilize anarchist organizational structure.

The anarchist organizational structure can be slotted somewhere on the spectrum between benevolent dictatorship on the right and completely open squatter culture on the left. The most common type of hackerspace is the democratic majority-rule model that’s familiar to many people, but Altman believes that in any form of organizational structure there are inherent advantages and disadvantages. A benevolent dictatorship, for example, is able to achieve rapid decision-making but at the risk of alienating its constituency who may consequently withdraw their time, effort or money because they no longer resonate with the direction of leadership.

On the other hand, squats, which are found more often in Europe than in the U.S., often adhere to a complete form of anarchism where practically anything goes, functioning on nil to minimal income and being completely open to anyone. As a downside, squats end up with complications and often have to boot people out who take advantage of the lack of rules and misuse the space for their own gains.

The democratic-majority-rule model also has its issues. Not all groups or individuals are made equal in democracy and while everything comes down to a vote, oftentimes important matters are split more or less down the middle, ending up with situations that are unsatisfactory for a large minority. This can disenfranchise large numbers of people and hinder the collective spirit of the community as a whole.

For Altman and his fellow hackers at Noisebridge, anarchism coupled with do-ocracy satisfies the Goldilocks principle just fine. The coolest part of it according to Altman is that people find they can make things happen for not just themselves but for their community. “People start doing things that they never imagine they could have done,” says Altman. It’s empowering because it helps people learn their capabilities as individuals and take what they’ve learned to their lives, projects and small businesses outside of Noisebridge.

In the end, Altman sees a hackerspace as a living organism, sustaining itself through the presence of a community that supports it. That goal can be achieved through any number of unique ways, whether through anarchism or democracy or hierarchy, whether as a non-profit organization or as a commercial business. As long as the community around it is healthy and there’s a need for hackerspaces by hackers, geeks and coworkers, Noisebridge and other spaces will endure and thrive in their missions for years to come.

As for Altman, he can be found Mondays at Noisebridge, teaching soldering or working on new projects – in short, doing the things he loves, at the place he loves, in the community he helped found and where he is proud to belong.