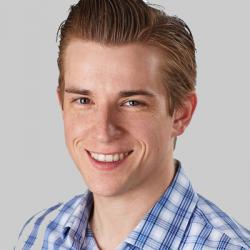 Ted Bigham is the manager of the Salt Mines coworking space in Columbus Ohio, and owner of Kow Abundant, a Google Ad and SEO company that focuses on local business. In his spare time he enjoys playing tennis with his wife and listening to podcasts.

Coworking isn’t just freelancers and solopreneurs anymore. Large multinationals like IBM, Verizon and Microsoft have started placing employees in shared office spaces like WeWork. Even small coworking spaces have noticed the recent uptick in employees as members: a recent survey found that 50% of coworkers don’t pay their own way – their company does.

If 2017 was the year when big business starting adopting coworking, then this has been the year when coworking spaces really started to feel the effects. And it’s not all positive. In fact, there’s a big downside, especially for small coworking operators. Even a small company with a handful of employees can wreak havoc on a traditional coworking space.

A traditional coworking space like this always has its doors open to new business. Just like any business, it has to keep the money flowing. And now, with the recent explosion in coworking as an office solution for companies, traditional coworking spaces are being presented with what seems like a great deal: regular paying clients, and lots of them. Sure, they’re employees of some company, but that’s interesting, right? The more, the merrier. And it all adds to the eclectic mix of people in the space – all types of workers, all brought under the banner of a single coworking community. That’s how many coworking owners and managers saw things. But after a couple years I’ve started to see it was too good to be true.

Negative impact on the existing culture

When a larger business with 6+ employees joins a coworking space, it’s hard for it not to put a strain on the existing culture.

Coworking is, in many ways, an incubator of startup businesses and professionals: a place to let them work together and to save money by sharing space. These things lend toward a cooperative ethos. Some spaces even make this explicit by having members help with basic upkeep, light cleaning, or managing the front desk. Even in managed spaces, there are norms that suit freelancers and solopreneurs, things like only booking the conference room when you need it, or taking calls in a dedicated phone room. Some spaces have strict rules for incorporating new members but most that I have seen are very accommodating, almost to a fault.

I have seen how larger companies impact a space. It often results in loud conference calls, non-stop sales meetings, and a more hectic pace. It stands out when compared to the usual quietude of developers, freelancers, and the self-employed.

To some degree, it’s a question of onboarding. When a company unfamiliar with the space brings in employees, it’s likely up to the coworking space to onboard the new members. But there’s a tricky grey area when it’s a company that’s already familiar with the coworking space. This happens all the time: an entrepreneur who’s a coworking member begins to grow her business and brings in employees. One by one, the employees become members of the space, and all’s going really well. But as this continues, the one company gets larger and larger, and its impact becomes more and more felt. If they’re going through a period of accelerated growth, they’re going to be hiring fast, bringing in people who are not versed in what it means to share a coworking space. That’s when the culture starts to shift.

It’s in the simple things at first. But when it comes to culture, simple things can make all the difference. People who have only worked as employees may be used to being pampered with a cleaning staff or janitors who take care of everything. Simple things like washing your own dishes, refraining from printing 500 page books, or replacing a roll of toilet paper aren’t necessarily common for employees. Even just being respectful to other members of the community who aren’t your boss is something I’ve seen disregarded. For some, “just being nice” is not enough. Employees often don’t understand or are not invested in the social contract that coworking members have. Coworking spaces are different from corporate offices, which can cause rifts and disagreements between members.

Proper onboarding can address a lot of this. But it doesn’t get around the fact that employees don’t have the same incentives and motivations that other members have. The idea that employee newcomers will take to the existing culture is actually a bit naive when you think about it. An employee’s loyalty isn’t to the office they’re working in. It’s to the company that employs them. Yes, the employee is also a member of the coworking space, but only by default. It wasn’t necessarily a choice for them. They don’t have the same reason to be there that other members have. This can often be felt in the way they treat the space and the way they interact, or don’t interact, with other members.

At heart, it’s really a question of what coworking even is. If it’s just shared office space, then fine, none of this matters. But if it’s coworking, then culture is worth talking about. The spirit of coworking comes from the community. Coworking is really at its best when it’s a self-directed, self-motivated group that can bounce ideas off one another and, dare I say, not bother one another too much. The truth is that most business owners or freelancers just want to do their work in a friendly, and often quiet environment and be on a similar playing field to the other members. But, from my own experience, I can say when a larger business joins a coworking community, the core values of the coworking space start to fray and corporate habits start to take hold.

Next week, look for Part Two of this series where we’ll focus on how these shifts in culture ultimately impact coworking as a business.