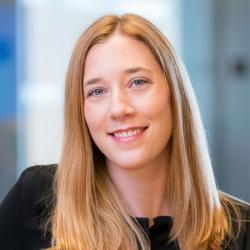 Megan Hutchraft, AIA is an architect at Dekker/Perich/Sabatini with experience in innovative office, commercial and educational environments.

by Megan Hutchcraft and Kate Dimock

As designers and architects who regularly work with coworking spaces, we want to know how they’re performing for both members and operators. How does the architecture impact the coworking community? Does the design accomplish what it intended? How is the movement and industry evolving? Fortunately, FatPipe ABQ, a coworking space in Albuquerque’s urban innovation district, allowed us to look under the proverbial hood and find out.

We first met FatPipe ABQ when they hired us to design their space. We renovated a historic high school library building for them, turning it into the high-tech coworking office it is today. Throughout the process, we focused on robust technology, varied workstations for different work styles, and design that would facilitate community through a relaxed atmosphere of serendipitous interactions – features that are fundamental to coworking offices across the country.

Upon opening its doors in 2014, FatPipe ABQ joined just a handful of coworking environments in its geographic market. Now, three years after opening, FatPipe ABQ is being heralded as one of the coolest coworking offices in the nation.

Because we have been connected to FatPipe from the get-go, we wanted to revisit the space and do a deep dive into how it and similar coworking offices are measuring up to expectations. In an effort to assess the space and offer design solutions to guide the continued evolution of FatPipe ABQ, we conducted interviews and surveys with the owners, members, and community partners. The resulting data has provided insights into the coworking model, especially for those entering new markets and refining operations.

We evaluated interview and survey responses to describe current conditions at FatPipe ABQ and combined that with nationwide data. The resulting information focuses on utilization, demographics, profitability, the cowork community, and performance of the space.

FatPipe ABQ experiences anywhere from 40%-50% occupancy at any given time with 30 full-time members and 35 part-time members. (*Note: Occupancy is being defined as the number of workspaces utilized by members at any given time.) These averages place FatPipe well within current norms. According to a 2016 study, 55% of co-work spaces have 49 or fewer members, and on average, 52% of desks are occupied at the same time. Another 30% of cowork spaces report utilization rates of 40% or lower.

One of the biggest surprises was that the majority of FatPipe ABQ members were not the tech millennials originally targeted. Rather, most members are more established entrepreneurs in their thirties and forties launching a second career, with many businesses outside of the tech industry. This member demographic of 30- and 40-somethings in non-tech fields is similar to national data that shows 36.8 as the mean age of coworking members. FatPipe ABQ and coworking spaces across the nation report that most of their members work in the creative industry. This includes roles in design, writing, research, marketing, consulting, business development, coaching, and the like.

According to our interviews, the open, highly connected, and flexible physical environment makes the space engaging and productive for members, while apps like Slack further enhance the experience and invigorate the coworking community. Community organizations like 1 Million Cups hold weekly events at FatPipe ABQ, inspiring lively conversation for members and the broader community. Interviews and user surveys revealed a general sentiment that FatPipe ABQ is a relaxed, fun, energized professional community.

FatPipe’s individual workspaces, presentation area, and lounge areas are heavily used. Amenities like Wi-Fi, flat panel monitors, phones, and mobile whiteboards support members’ day-to-day operations. Most members at least somewhat agreed that these amenities and the other benefits available to them are in line with the rent. Furthermore, community organizations that hold events at FatPipe ABQ noted they did so in part because of its creative design.

The owner has reported that FatPipe ABQ is not meeting their financial goal. Interestingly enough, they aren’t alone. Compared to similarly sized coworking communities that have been around the same length of time, FatPipe is among the 69% of spaces that break even or are not profitable.

From the information we gathered about FatPipe ABQ, we developed key takeaways that can help FatPipe and similar coworking environments continue to grow.

Some members outgrew the space at FatPipe ABQ due to expanded teams and operations. A key consideration of coworking spaces moving forward should be scalability. Scalable options for rent structures and space could be evaluated to accommodate teams of various sizes.

Despite the rise of online social networks and work becoming more dependent on technology, 71% of respondents joined FatPipe ABQ to gain better access to other entrepreneurs. Coworking environments are testament to the importance of face-to-face interactions. FatPipe has been extremely successful in its networking and programming events, which stimulates opportunities for socializing, learning, and collaborating. Refining operations and design to adequately support member needs and events is key as coworking gains traction.

As members’ needs and interests have changed, FatPipe ABQ has evolved operations, including how and when events are hosted. Coworking operators should consistently check in with members to best understand how they’re using the space, then adapt operations accordingly. This feedback loop will set the best coworking offices apart.

Coworking continues to push into new territory, with 58% of US coworking spaces planning to expand in the next year. FatPipe ABQ, for example, is expecting to introduce the brand to new cities in New Mexico and continue their efforts of attracting “solopreneurs” to the state. As the workforce changes over the next decade, FatPipe ABQ and other innovative coworking models will continue to evolve to meet the needs of entrepreneurs, freelancers, and other independent workers.