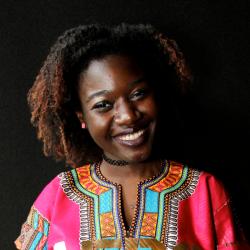 Aude Konan is a London-based French Ivorian writer and former actress. She has been published in The Guardian, Media Diversified, xoJane, Complex Mag and Amina, among others. As a playwright, her plays have been performed at the Stratford East as part as their Young Artist Lab and and with the company Talawa Young Theatre 2015. Aude write short films for production companies such as Busy Kiwi and Motionbot. Find more of her work at audekonan.com. She doesn't like writing biographies in the third person, because it makes her feel like Alain Delon (which I’m obviously not).

Last month, I travelled to Scotland to work at a TV festival. Then I went back to London where I was working for a production company before going to Paris, my hometown, to research for a freelance article I’ve been commissioned to write. It may look like a lot of traveling, but for me it is part of work, part of life.

As freelancers, we are in a position where we have the relative freedom to choose where we want to work, and for many of us that means working abroad. It’s a freedom than even expats may not have. I choose to work in London because it has the biggest TV market in Europe and plenty of opportunities for writers. Plus, I love the city. I also choose to work in Paris because it’s where I am originally from. (Of course, if I’m really honest, I’d love to work in Barcelona because it is my favorite city in Europe. But it doesn’t have the market London has.) My friends who are freelancers working abroad have also chosen the cities they are working and living in.

It isn’t easy, but it’s incredibly rewarding. Here is how it worked out for me – and a bit of a cautionary tale if you are thinking of making the jump.

Prepare yourself before making the move

I first moved from Paris to London when I was 19, armed with a Contacts handbook (the then-required industry guide to theatres, production companies and agents) and my savings. My English was good, my knowledge of the country fairly wide and I had a family member whose house I could crash at.

Despite all this, and despite having spent the previous three years researching everything I could on life in the UK, I was overwhelmingly underprepared. I was scammed by a fake modeling agency and failed every single one of my auditions.

When I came back a few months later, I felt I was better prepared. But I also realized that in order to make it, I would have to start from the bottom again, and I wasn’t ready for that. Eventually, my fifth attempt worked because by that time I was more than ready.

I knew that in order to work in the UK market, I needed contacts and a track record. I had the choice between jumping straight into the market (and potentially struggling for years before getting my big break) or going to a film school and potentially being out of the workforce for a couple years. I could go to a film school in France, graduate and then move to the UK, or I could simply study in the UK. I decided on the latter because I figured that if working the UK was my end goal, getting educated there would help.

So when I say prepare yourself, I mean it. Learn all about the specific market you’re about to enter. Do your research on the key figures in the industry, the people you need to know and who will help you kick start your career. Most importantly, think about what skills you can bring to the industry you are targeting, and be aware of your strengths and weaknesses as a foreigner and/or non-native speaker.

If you’re working in a bilingual environment, it is mandatory for you to be bilingual, or at least fluent in the other language, before looking for work. Otherwise, no one is going to take you seriously. You also need to have native speakers to help you proofread what you write, from your CVs and cover letters, to your actual work. You may feel like you don’t need them but having a few people read over your work is always a bonus. They can pinpoint mistakes you wouldn’t even have realized were in your text.

From a very technical point of view, you need to know how to get healthcare and pay taxes in both countries. You may have to hire an advisor to help you.

Be flexible and ready to adapt to the differences between countries

When I decided to go to film school instead of trying to find work as a writer, I applied to the biggest film schools in London. They all rejected me. I was gutted. Was it the sign I had been dreading, that working in UK wasn’t simply for me or that I didn’t have what it takes?

I wasn’t much of a success in France, so basically, it meant for me that I had managed to fail in both countries.

I didn’t want to live anywhere in the UK but London, but I realized that I had to be flexible. If I wanted to make it in London, it would be easier if I had a British degree and British connections, even if it meant living in another city.

I got an unconditional offer from a Scottish film school and spent over a year there, which turned out to be one of the best decisions I made.

I spent the beginning of my adulthood working in the UK, so I’m more accustomed to the working habits of this country. One day, I went to work knowing that I’d finish early because I had to catch up extra hours I did the day before. But by the end of the day there was so much work that I couldn’t just leave. I stuck around and ended up putting in even more hours. One could say that guilt is a powerful tool, or that my work ethic was strong. But it’s simply proof that I had become accustomed to the British cultural tradition of working extra hours for free. (Still, I can’t help but feeling surprised by the fact that eating at your desk is completely normal, or that your lunch hour is not paid.)

But working abroad is about embracing different cultures, not imposing your own, so it is important to remember what made you choose to work in a specific country in the first place. It is safe to hang out in a community of people from your country of origin but as an independent worker, you also have to make the effort to mingle and network with locals. These are the ones who will help you find your next job, explain to you all the specifics about working in your chosen market, and will help you settle in a new country.

Get the best of both worlds

One thing that I love about London is the variety of coworking spaces that are available. Some of them are even free. This is something we don’t have as much of in Paris, so I use them heavily when I can. On the other hand, one thing I love about working in France is that we get paid holidays, so obviously this is something that I enjoy when I’m there.

Eventually, working between two countries means having the best of both worlds.

But I will not sugarcoat it: working between two countries also means that your personal life will be in shambles. You will miss your family and friends’ birthdays, weddings, births, deaths and so on (okay, maybe missing this last one is actually a good thing).

Working abroad means that you’re missing everything that is happening at the same time in your home country. You’ll miss out on the new job opportunities, networking events and everyday chances to remind people in the industry that, hey, you’re there and potentially interested.

Once you work abroad, you’re neither there nor here. Once you work in a bilingual environment, the time you spend improving your language skills, and then working in another language is less time spent working in your native one. If you’re a translator, for example, you take the risk of struggling to only find work related to translating, even if you want to work solely in one language.

One thing that is mandatory is to make sure to keep your contacts and maintain a presence in the different countries you’re in. It means more travel expenses to make sure people in your home countries still remember you. When I moved UK a few years ago, one of my tutors advised me to not burn any bridges in France. I didn’t think it was particularly important at the time, but I reluctantly listened and it was a very smart decision.

On the bright side, the higher-ups in your market will be more interested in your profile if you show a consistent and successful track record in two countries. They are going to be more interested in meeting you because your language skills and/or knowledge of another country may be useful for them, and because it’s a good indicator that you’re flexible and self-reliant.

Working abroad is difficult. Working in a bilingual environment is difficult. I’m doing both, and I try to get the best of both. As an independent you have to learn how to navigate between these different worlds. But remember that you’re lucky to do so. How many people wish they could live abroad, but never made the decision to jump?

Image credit: Photo in the creative commons thanks to flickr user Phillip Pessar.