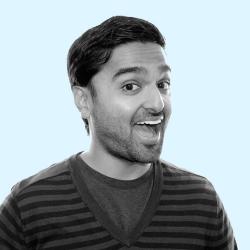 Salman Ansari is a founding engineer of Involver, a social startup that was recently acquired by Oracle. He loves to build web and mobile products, and has a strong passion for design. Salman spends his free time teaching developers how to code, giving motivational talks, and DJing progressive house music sets.
Website: salman.io
Blog: salmansays.com

In our hyper-connected world it can be difficult to see so many success stories, achievements, and new products shared every day. While it’s exciting to keep up with all that’s going on, I’ve noticed that it can also start to wear down our self-confidence and widen the gap between ourselves and the ‘superstars’ whose successes we read about. Yeah, we’re inspired by their work. At the same time we’re also depressed by it because it threatens to devalue our own. It is a paralyzing cycle that can sometimes be an obstacle to our own creativity.

In reality, though, these superstars are not so different from us. They are regular people with regular jobs, working as hard—and as passionately—as we are. But there is one key difference: superstars share their work. They write blog posts, give talks, submit open source libraries, and so on. Sharing our work publicly is the only thing preventing us from being the superstar, the inspiration, the public success.

Being an inspiring figure is an option available to each of us—we just have to put in the time. If we spent even a fraction of our current efforts on sharing, we would unlock a world of opportunity for ourselves and for those we inspire.

Of course, most of us don’t. We hesitate for a variety of reasons—we’re afraid, we’re busy, etc. I want to stress, however, that taking the time to share your work, your passion, and your insight will open so many doors for you that you’ll wish you’d been doing it your whole career.

While sharing your work with the world can be done in a number of ways—writing, teaching, building, etc.—I’m going to focus on public speaking.

Public speaking is typically regarded as one of the hardest things to do. But it’s worth the trouble because it’s the highest yielding in terms of reward. I know, I know, most people would rather die than speak in public. But this works to your advantage: if everyone thinks it’s insanely hard and you do it anyway, then who’s the superstar after all? Here’s why speaking about my work has been so rewarding.

Teaching teaches you: Explaining a concept to someone else in a concise way, such that almost anyone would comprehend it, takes thoughtfulness and skill. If you take the time to learn how to teach something, it’ll make you even more knowledgeable about the topic than you were before. I would even go as far as to say that teaching experience is as valuable as working experience.

Communities help you: In speaking and giving talks, your audience will appreciate the time and effort you took to put it together. They’ll ask you questions, connect with you and seek you out to discuss opportunities. Everyone knows networking is important, but imagine if at the next event you went to, everyone in the room tried to connect with you and assumed you were someone worth knowing. That’s what happens when you give a talk.

The pressure is good for you: Perhaps you’ve never been in a situation where your thoughts needed to be polished enough to present to a large audience. Being in that situation will push you to levels of clarity, insight, and understanding you never thought possible. I guarantee that when you give your first talk, you’ll be happily surprised at the quality of it. At the end of the day, if you are someone who puts care into their work, you’ll likely put the same care into your talks and the quality will be just as good.

It’s fun: It’s fun to give talks. It’s thrilling. It’s exciting. It’s something you’ll come to look forward to and be thankful for. It’s addictive. Once you start doing it, it’s pretty unlikely you’ll stop.

Still not sure? Let’s look at why most of us hesitate.

“I’m too busy.” Yes, we’re all busy. In reality though, “busyness” is just a prioritization problem. You will make time for it if you think it’s important.

“I have no idea what to talk about!” You should talk about anything you’re passionate about. Think about what really excites you or what really annoys you. Anything you would talk about at length during a conversation with friends might be a good choice. It’s important you talk about subjects in which you have personal experience (not just opinions) but don’t worry if you’re not an expert. It’s more important that you care about the topic. If you are excited to speak about it, people will be excited to listen. It’s pretty simple.

“No one will care about my passions.” On the contrary, if you’re passionate, people will care. People want to hear stories. They want to be inspired. If you tell a story in such a way that others can see your own excitement and emotion, they’ll be inspired too. It’s not necessary that your audience be innately interested in the topic you’re talking about, they just need to be convinced of why it’s interesting.

By example, I love San Francisco, particularly the fog that randomly blankets the city. Most people dislike it because it brings cold weather and dark skies, but I love it. When I’m walking through a foggy street I feel like I’m touching the clouds. One day I came across Adrift, a time-lapse video showing the fog’s majestic behavior. Placed against a gorgeous soundtrack, it epitomizes everything I love about my city.

Over time, I showed the video to more and more of my friends. When I was living in New York I showed it to people so they could see why San Francisco is so beautiful. When I went to Cape Town, South Africa to teach, I showed it to my students there. Everywhere I went, I found some reason to show people the video. Anyone could see the emotion in me as I spoke about it, the joy I got in watching it. Everyone took away something different from having seen it, but the inspiration was universal.

Later, I had the incredible luck of running into Simon, the video’s creator, in person. I told him how much his video meant to me. I’m sure he’s received positive feedback about his video online, but this was different. I don’t think he ever imagined it would have been this loved and that it would travel so far. What you create can inspire people from all kinds of backgrounds all over the world. You never know who you’ll inspire, or how. This is the magic of the modern connected world. Use it!

“OK, I know what to talk about… but I’m scared.” Fear of public speaking is all too common, and in some ways it doesn’t really go away. No matter how many talks I give, I still get butterflies before speaking. The truth is, there are no shortcuts here. The only way to get good at public speaking is to practice, practice, practice. You cannot simply read a book to learn how to give good talks—you learn by giving talks. Don’t overthink it, don’t overanalyze or spend months planning. Just pick a topic, lock down the date, and give the talk. Then iterate. By the time you stop to realize what is happening, you’ll already have become a public speaker.

“No one will invite me to speak. I’m not famous.” Don’t wait to be invited. Some people assume it takes years of effort in self-marketing to build a reputation and get to the point where you can give talks regularly. It doesn’t have to happen that way.

I don’t really have a big reputation in my community. Like most people, when I walk into a Meetup or a conference, I’m essentially anonymous. Still, in the past year I have taught three immersive courses with over 500 hours of lecturing, and have given at least 15 talks at a variety of events with audiences ranging of up to 150 people.

How do I get these opportunities if I’m not publicly well known? It’s all about networking and community. When you give a talk, you maximize the opportunity by doing the best job you can to impress and connect with as many people as possible. Soon, other organizers who attended will start to ping you about future talks. Referrals make up the majority of speaking opportunities I get.

“Fine. But how do I get my first talk?” Thankfully, this part is pretty easy. Try attending a Meetup and telling the organizer you’re interested in speaking at a future event of theirs. That’s it. Honestly, a majority of the time they will happily say yes to whatever you propose as long as it’s reasonably in line with their tone and content. Meetups are often desperate for speakers and presenters and love it when people reach out to them.

That’s how I got all of my initial opportunities. I just emailed someone and suggested what I wanted to talk about. Once there was a firm date, of course, I proceeded to freak out. But the fear applied the necessary pressure for me to do great work.

Eventually I gave the talk and it wasn’t nearly as bad as I feared it would be. If anything, I received more positive feedback after the talk than I’d received at my job all year. This is just the nature of speaking. In a short amount of time you can connect and provide value to a lot of people. I learned from the mistakes of the first attempt, refined my content, and offered the same talk to another Meetup, this time doing a better job of delivering. This is a tried and true process.

The hardest part is getting over your own fears. Once you do that, the rest is just work, just like any other project you’ve successfully completed throughout your career. Before you know it, you’ll be getting all kinds of amazing feedback from people in places you never expected. You’ll have blurred the line between you and the superstars, ultimately inspiring others to share their own work. This cycle of inspiration spreads rapidly and grows exponentially. All it takes is a little spark to get the fire started.