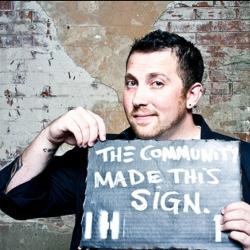 This year marks the ten year anniversary of when I became a champion for and a practitioner of coworking. So as you might imagine, I’ve been doing a lot of reflecting recently. Reflecting on lessons learned. On friendships forged. On difficult decisions. On what’s changed. On what hasn’t changed.

That last one – what hasn’t changed in the last ten years of coworking – that’s been bugging me a lot recently.

In 2006 coworking was, as researcher Jennifer Magnolfi would describe it, an edge phenomenon.

True story: I used to have a Google Alert set up for the words ‘coworking’ and ‘co-working,’ which fed me real-time updates when coworking was mentioned around the web. For years I read every article. I had to turn those alerts off sometime in 2010.

If I could go back to 2006 and tell myself what was about to unfold, my 2006-self would most certainly tell my time-traveling self to shut up and go home.

Welcome to 2016 where coworking is mainstream. Now:

Coworking is lauded as revolutionary, innovative, and dozens of other buzzwords that journalists like to use to describe things they think are cool. Companies of all sizes are scrambling to make their offices look like coworking spaces (even if most of the time they’re completely missing the mark). Corporate real estate has woken up from its slumber for the first time in a couple of decades.

A friend of mine who was a member of Indy Hall in our first few years sent me a text message last week from the Bloomberg/Businessweek Design Conference where coworking was a main-stage topic. She said, “It’s kinda surreal to see coworking sold to corporate America on the big stage.” I know my perspective is a bit unique, but from where I sit, I think surreal is a good word for it. Some days, it seems like the world has shifted under our feet and I think it’s normal for that to feel a little bit weird.

But I am concerned.

I get asked lot if I worry about the big coworking chains pushing out the smaller local providers. (The answer is no: if us “little guys” stay good at what we do, our biggest competition is the living room, not another coworking space).

I get asked a lot if I’m worried about cities getting “saturated” with coworking spaces. (The answer is no, unless you’re offering a commodity product that’s just desks for rent. In which case yes, you should very much be worried.)

The growing awareness of coworking has hit flywheel-mode. More people discover coworking for the first time every day. This is a far cry from the days of it being an edge phenomenon. At the same time, I’m fairly certain that we’re still near the very bottom of the growth curve for coworking. New spaces open every week. Maybe every day? I’m not even sure any more.

This also means that in most parts of the world, the “oldest” coworking spaces are only two or three years old; six years old would be considered “mature.” (I guess I’m basically a coworking dinosaur. Indy Hall is about to turn ten years old.)

After going to dozens of coworking conferences, and working with people who run coworking spaces in every corner of the planet, I’ve noticed something unsettling about the conversations that aren’t changing.

Now don’t get me wrong – these conversations among founders and staff are nothing short of transformative, and have played a huge role in the momentum that coworking has built over a fairly short period of time. Very few industries trade information as readily as the coworking industy does. Many people in the world of coworking are unafraid to share their biggest mistakes along with their best practices. Some coworking space founders are even willing to break the sacred vow they took with their accountant to open their books to another aspiring founder.

In case it’s ever been unclear, this is kind of openness and transparency is categorically unusual in the world of business. And I want to keep having these “on ramp” conversations. Proof positive: I answer 75–100 emails a week from people seeking help related to coworking. Questions range from “I’m thinking about XYZ, should I do it?” to “I’ve tried everything and it hasn’t worked. Any suggestions?” to the occasional celebratory “I did what you said and it worked! Thank you!” which is invariably followed with “Now I have a new question…” These emails fuel my insatiable curiosity and passion for humans. Being able to play even a tiny role in helping people succeed – that’s my oxygen.

In all this, I get to notice patterns. What’s working and what isn’t. And this is where I get concerned, because too many people in the coworking industry are spending more too much time paying attention to what’s happening in the coworking “industry.” Too much time reading blogs and news articles and not enough time paying attention to the stuff that matters most. Too on much focus on what else is out there without enough focus on who, as in “who is right in front of me.”

I’m starting to realize that while we’ve been building up such incredible resources between coworking spaces, a lot of people have started to forget that each of us has the most valuable resource right under our nose: our members, our communities.

Ninety-nine times out of 100, the first step I take to answer any question about coworking comes from answering, “Who is in this community? What do they think? What do they value? What do they care about?”

Once we know those answers, hard questions become a lot easier to deal with. Uncertainty and fear start to fall away. Member voices matter most for the success of coworking. So why are they so rarely a part of the coworking conversation?

There are a whole lot more members than there ever will be operators. We might assume they don’t want to talk shop, and yet every time I speak to members of coworking spaces I learn more from them than I have from anybody who runs a space. It’s true. And it’s not just Indy Hall’s own members. I learn more about how other coworking spaces work (and don’t work) from their members and former members – far more than I do from their respective operators.

Imagine if talking shop about coworking was more about how our members experience coworking, from their point of view. Is it really so strange? Maybe it’s because “industry” conversations historically don’t include the customer – and yet, coworking is lauded as this innovative, revolutionary force that’s going to shape the future of work.

It’s not just for the good feels, it’s to stay in business. As an operator, I have to choose where we put our effort wisely, especially as the ecosystem continues to evolve so rapidly. I always choose to relentlessly invest more into our community than anything else. Always.

The coworking industry’s biggest vulnerability is that owners, operators and staff turn to each other for help faster than they turn to their own members for help.

There’s literally no better way to get inside the heads of people who work in coworking spaces than to invite them to speak about their experiences being a modern worker. I want to create a place where we can learn, together, about what’s really happening in the world of coworking from the voices who know it even better than we do – the members. They know coworking. They’re the ones who pay to do it.

I wanted to share where I go to solve problems every day, and gather clues about where coworking is going next. So I created a coworking conference that is designed to highlight coworking from the point of view of a member. In April, we hosted the very first People at Work Summit. It had two unique, defining features:

1. It’s entirely online. No travel costs, no time away.
2. Most of our speakers are coworking space members, and almost everyone else is from outside of the coworking industry but has a unique lesson to share that connects back to coworking.

Knowing that our audience and speakers would be joining from all over the world, we had to invent a new conference format. Knowing what topics show up at every coworking conference, we wanted to explore new topics that could spark new conversations. We worked closely with every single speaker to help them choose a topic, and personally coached them to be comfortable and confident sharing their point of view. By now we have an active online community. Several weekly chat discussions have helped us really get to know the people who attended the conference before it even began.

I’ve been on the organizing side of several conferences in my career and this event broke the mold in every way. The Summit was the level of “experimental” that I think coworking deserves. One of our marks of success was that people who attended the People at Work Summit are going on to attend or speak at the major in-person coworking conferences that happen throughout the year.

The conversation we’re starting here didn’t stop at the event. It’s ongoing, and it’s growing. I hope you’ll join us in this experiment, and play a part in creating a new conversation about coworking for the first time since its inception.