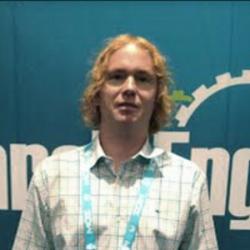 Andrew Broadbent covers entrepreneurship and coworking news, and provides digital marketing tips and strategies for the startup and investor community.

This past year marks the beginning of a new level of integration between multinational companies and coworking. Verizon, IBM and Microsoft are testing it out, while big media conglomerates and newly crowned tech giants have been moving employees into coworking and incubator spaces. Coworking giants like WeWork have long anticipated Fortune 500 tech companies as members, but it took until now for the trend to solidify.

In New York City, one trend coming out of coworking spaces, like Galvanize, The Alley, and Rise is the integration of incubators into their business development strategies. By offering space and an environment with resources, they are able to cater to and retain members who are launching startups. Corporations are forming partnerships with coworking spaces, thereby making it easier for them to stay on top of technological innovations and top talent. They want to keep an ear to the ground when it comes to potential disruptions in their industry, and they need to closely monitor potential acquisition targets. Renting from coworking spaces can help them check all of the boxes: Attract top talent, monitor competition, and find acquisition targets.

Here are a few examples of coworking-corporate partnerships in the past couple years:

In 2016, Barclays, the multinational banking institution launched a Fintech focused accelerator space in Flatiron NYC called Rise that partnered with Techstars. It offers 3 floors of membership coworking, a 100-seat auditorium, a suite of meeting rooms, and video and podcast recording facilities, all part of their mission to help innovative startups to collaborate, experiment and grow.

IBM partnered with coworking operator Galvanize at their recently launched New York office space in West Soho. Furthermore, in March 2017, IBM announced a new curriculum that furthers innovation by tapping into Galvanize’s immersive learning environment called IBM Cognitive Course, which brings AI cognitive skills and data science curriculum to the next generation of machine learning scientists and developers interested in some of the most lucrative careers in tech. Then, in April 2017, IBM announced a landmark deal to take an entire WeWork building to house over 600 employees.

Microsoft also made headlines at the end of 2016 with their decision to give 30 percent of their employees (their sales departments) in New York City access to WeWork locations. Microsoft cited their desire to tap into the startup culture in a more flexible coworking office arrangement.

WeWork, for their part, just announced a major acquisition of NYC coding bootcamp Flatiron School. This strategic move is aimed at creating a direct pipeline of junior developers for WeWork’s corporate clients. They have also been moving away from only catering to the startup and small business sector. Thus, companies like Microsoft or IBM have been renting WeWork spaces for their employees and testing more involved partnerships. WeWork now manages the entire building for IBM in Greenwich Village, and it runs Airbnb’s Berlin office as well as Amazon’s Boston office. These new trends have been fueling Wework’s new aggressive focus toward partnering with enterprise tenants. A spokesperson from WeWork cites a 90% growth rate in the number of enterprise corporation clients between June 2016 and June 2017, with a 360 percent increase of remote worker members from enterprise companies. According to Entrepreneur, WeWork is now valued at $20 billion.

Though Wework is the biggest player in New York City, Jason Saltzman, the founder of collaborative space Alley, projects confidence. In June 2017, Alley announced a new and unprecedented partnership with Verizon. This Verizon partnership (and Verizon is the world’s leading telecommunications company) has allowed for Alley to open up three new locations in New York, Cambridge and Washington, D.C. Dubbed “Alley powered by Verizon,” it’s more than a just a revenue sharing real estate deal: Verizon executives hope to benefit from a different kind of networking. “To us, the real value is what we get by bringing entrepreneurs into the building and having them meet our folks,” said John Vazquez, senior vice president and head of global real estate at Verizon. “We realize that things will be invented outside of Verizon and we want to be a part of that.”

With this partnership, Alley is attracting a growing number of corporations in addition to earlier stage startups.

“A few years ago, many multinational corporations would not consider renting part of a coworking space, but what a difference a couple of years make,” Saltzman said. “As I see it on the ground, coworking is the fastest growing asset class and it is here to stay.”

Many companies “put a premium on the flexibility and pay-as-you-grow nature of coworking,” he added.

Saltzman attributed three growth drivers behind the coworking sector’s fast expansion: continued growth of start-up culture, a more flexible globalized workforce being fueled by technology, and the millennial generation. That cohort, Saltzman said, is embracing and demanding facets of the sharing and experience economy.

The growth is likely to continue to change the landscape of office real estate.

“There will be different offerings and brands to suit the various segments in the markets,” he said. “Similarly, commercial building owners will become more educated and conscientious about which coworking brand to align their building with.”

A recent Q3 Occupier Survey by the commercial brokerage firm CBRE, indicates that almost half (44%) of corporations are already using some type of flexible open platform office solution. Data from the survey, which tracks and covers leaders of corporate real estate departments for major corporations, found that they expect their usage and demand for flexible office space will continue to increase over the next few years. Sixty five percent of the companies expect to use coworking as part of their office portfolio in the Americas by 2020. And the major brokerage firm, JLL predicts that, by 2030, up to 30% of all office space will be, in some form, flexible or have an open layout design. The report cited a wide variety of factors for switching to the coworking office space approach, from financial incentives to a need to spur collaboration and innovation.

The demand for shared office coworking spaces is surging in the US and around the world. Coworking has proven itself over the last few years and, with several multinationals joining in, it’s official: This is the year of the coworking space.