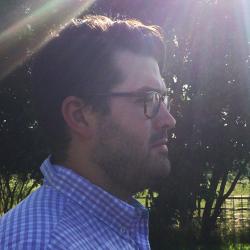 Chris Allen coworks at Originate in Springfield, MO. He runs BeatBox, a digital team. Having spent too much time inside cubicles he is focused on highlighting the perceived and tangible benefits of coworking.

It appears a couple of people think the open-plan coworking space is a terrible scourge upon the landscape of the modern workforce. 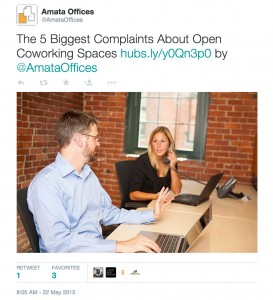 Frank Chalupa, co-founder of Amata Office Solutions, recently published a list of what he called the five biggest complaints about open coworking spaces. I wonder if those five were his only complaints, or if his ghost writing team just thought five was a good number for SEO. I guess we’ll never know.

What we do know is what’s on his list and, perhaps unsurprisingly, that Huff Post was willing to publish it in their business section.

As WeWork just closed another funding round at a $5 Billion valuation and we hear success story after success story about coworking spaces, it seems that not only has the emerging workforce spoken out in favor of coworking but so have venture capitalists. In our coworking space, Originate, we have seen exciting growth and awesome relationships spring up within our four walls—and no evidence of complaints like the ones Chalupa wrote about.

1. “No seat for you!”
Showing up to a coworking space after 9 a.m. could mean sitting next to the elevator, kitchen, or other high-traffic areas where it’s difficult to concentrate. Even if you’re lucky enough to snag one of the better seats in the house, you could find yourself fending off desk snatchers if you step away…

2. “Yes, we can hear you now.”
Sitting in a new seat each day is great for networking, unless you’re next to a loud neighbor who takes personal calls at their desk and would rather talk about what they did last night than anything business-related.

This is where the list starts to lose touch with reality. I wonder whether Chalupa has ever been in a real coworking space or if this is just his caricature of what it looks like when “millennials” go wild without closed offices and cubicles. I get the sense that he is describing a high school cafeteria where some girl named Cathy steals your seat and then eats her lasagna with her mouth open while she talks about her parents’ llama farm. Pretty much every coworking space offers phone rooms and lots of space for people to pop into to take a private call. If anything, most spaces are very conscientious about making sure no one’s phone use or noise level impinges upon anyone else.

3. “Is it hot in here, or is it just me?”
Lighting and temperature can directly impact a worker’s performance and productivity, yet the majority of coworking spaces offer little control over these and other workplace variables.

This one is frankly a bit bizarre. Oh, wait, it’s probably just a non-paid ad for one of the amenities offered by Chalupa’s business suites. I am surprised he didn’t put a winky face emoji at the end of it. Not being able to control the thermostat is a something that happens in, like, every building anyone goes in, which is to say it’s not a problem that’s exactly noteworthy. The fixed hot or cold temperatures he mentions in the article could also be used as a deterrent for marriage, when your spouse likes to literally crank up the heat, but sometimes the result is worth a little sweat. One solution I might suggest is to just wear a tank top to the office. Oh, that’s right, you have that pesky dress code. Too bad.

4. “Pack your bags.”
[W]orkers have to cart their personal belongings to and from the office each day, or try cramming them into a small storage locker (which usually comes with an additional fee). This can be more than just a minor inconvenience. Without having a dedicated place to store food, beverages and other office “necessities,” workers may find themselves eating out at nearby restaurants more frequently, a habit that can be bad for the pocketbook – and the waistline.

That might make sense if people who work in traditional offices never went out to eat. Perhaps they would much rather eat their tuna salad sandwich in a gray company cafeteria with florescent lights, or even at their cubicle. I wonder if maybe Amato Office Solutions has a really poppin’ cafeteria.

Any space worth its salt (food pun!) has dedicated areas for eating, and, yes, drinking. And shared refrigerators will have some sort of system delineating what food is private and what’s shared.

5. “Can you give me a minute?”
A thoughtfully designed coworking space will include separate huddle rooms and phone booths for private calls and conversations, but not all office providers follow this blueprint. Workers who do not have access to enclosed meeting areas may have to resort to using lobbies and other public spaces with a lot of background noise, limited seating, and few work surfaces for laptops and notepads.

This is reminiscent of the lunchroom vision. I get it, the guy doesn’t like people talking loudly around him, but he felt the need to add a pointless point just to reiterate his fear of loud talkers. Didn’t he just complain about people making phone calls like a minute ago?

Just like some people have problems with Ferraris, cheeseburgers and true love, some people will just hate coworking. Not everyone loves the “ping-pong tables and kegerators” that Chalupa mentions in his article. Not everyone loves collaboration and open supportive workplaces. Not everyone wants to be around other people, or get to know their coworkers as friends. And, though I don’t understand it, not everyone wants to work from a place where your neighbor gives a shit enough to help you on something, not because he has to, but because he wants to.

Some feel better with the safety and security of a time clock and a cubicle with a nameplate on their desk. Even for people that cowork, some want a place that’s less clubhouse and more corporate. Not everyone is a fan of the open floor plan, either. But there is something unique about most coworking spaces: each of them is, well, unique. Each, in order to survive, must be in tune with what its members want, which means the results will always be slightly different.

Coworking isn’t for everyone, and I am sure there are people out there who have had bad experiences. I hope they don’t give up looking, because coworking comes in all types. Real coworking will value camaraderie, hustle and determination over corner offices and adjustable thermostats. Let the haters hate, let the suits and ties in the cubes rant. Some of us might be too busy talking over the kegerator to hear.