Perttu Salovaara is an Adjunct Professor at the New York University Stern School of Business. As a leadership researcher, he now teaches and mentors on Social Impact Consulting. Originally from Finland, he coworks in Brooklyn, NY.

Companies have long experimented with shared workspace and measured its impact on workers. In my own research, I’ve studied the effects of shared workspace on productivity, communication, creativity, and community.

You’re familiar with coworking. See if the following quote rings a bell:

“[N]ot only are all office walls removed, but most desks and other permanent stations are eliminated as well. … All work is performed at laboratory benches and large round tables, and an individual may choose to work anywhere in the area that suits him or [is] convenient.”

If that sounds like coworking, you’ll be surprised that the quote is actually from a report on IBM’s new “non-territorial office” from 1971. Forty-three years ago, a main concern for IBM was to increase communication in a product engineering department. The results of the study indicated that communication increased significantly, but an increase in performance could not be verified. To some, these results might sound familiar, too.

Coworking in its simplest form – sharing workspace with others – was not created out of the blue. Various experiments with different kinds of communal workspaces existed long before coworking movement started.

The Barbarian Group conducted an interesting experiment in their New York office: they installed a never-ending desk made out of single surface, with a length of 1,100 feet. The desk (is it a desk?) can accommodate 175 people, creating arches and tunnels under which people can work and meet. 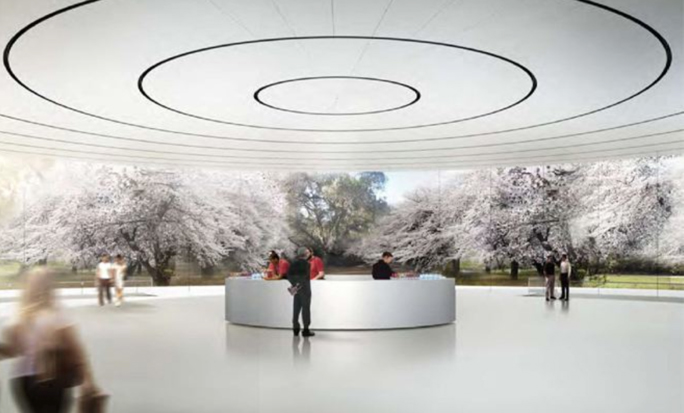 And who hasn’t heard of Apple’s plans for its upcoming headquarters in Cupertino, California. This futuristic doughnut dubbed the Mothership is set to open in 2015 and will provide space for 12,000 employees.

Their floor plan aims to support cooperation and communication, starting with a huge indoor meeting place called The Atrium, and outdoor park areas meant for strolling. Anybody who has read Steve Jobs’ autobiography knows his fondness for zen-like simplicity and that he sometimes held walking meetings, as walking is supposed to increase creativity and creative problem solving.

Why do we cowork?

What does coworking really mean and where does it come from? As far back as humans have left traces, people have always cooperated. Even if philosophers like Thomas Hobbes famously defended the argument of homo homini lupus (man is a wolf to man), asserting that cooperation is carried out of self-interest, he certainly didn’t deny the power of cooperation.

The power of cooperation started to draw researchers’ attention in 1920s and ’30s through the so-called Hawthorne studies. A group of scientists separated six workers at the Western Electrics Hawthorne factory in order to study how lighting affects performance (electric lighting had only recently been introduced but it was expensive to install). They conducted a series of experiments where the amount of light was diminished in increments, and assessed the workers’ performance. Productivity, measured in number of finished items, increased by improving lighting. But the real surprise followed after they set the lights back to their dim starting level: the productivity increased again. The Hawthorne effect has two main explanations. First, when anybody knows that they are being observed, it has a psychological effect. Regardless of the lighting, it seems, the workers were productive if not only because they were aware they were being studied. But more importantly, the study pointed to what is now a truism, that social conditions play a role in work life. 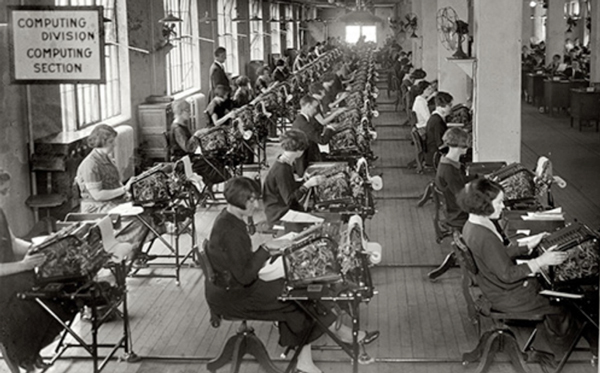 US Veterans’ Bonus Bureau, Computing Division in Washington, DC, circa 1924.

Offices in the 1920s and ’30s were often organized according to scientific management principles connected to Taylorism and the Ford factories. Space was divided and measured for efficacy, and was organized as meticulously as possible. While the technology may seem anything but, note that this black and white photograph depicts a computing division from the 1920s.

Even if the Hawthorne findings were drawn from a factory context, in Germany in 1950s The Quickborner Group started to apply those principles to the office environment. They started to pay attention to teams and social networks (the original offline kind) with a focus on enhancing communication. This introduced the idea of open space and flexible floor plans with clusters of desks.

Despite these concepts evolving into cellular offices, and studies like IBM’s in the 1970s, real open offices – where people do not have own rooms or cubicles, but rather work at group desks without walls – were not really introduced until late 1980s and ’90s. 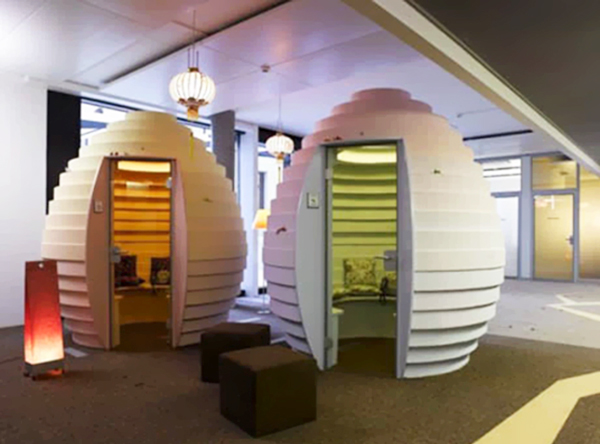 Today companies introduce ever more creative uses of space, guided to some degree by the idea that creative input (in design) will help increase creative output. Contemporary shared workspaces, especially in the tech sector, have a design-forward appeal.

There is yet to this date not that much factual information to clearly confirm or deny the impact of these so-called creative spaces on creativity. As anybody who has worked in several locations can attest, creativity cannot be managed. It does not happen when someone tells people to go to a “creative space” and come back with better ideas, even if that creative space is a strange pod at Google (see right) or Apple’s sprawling forest.

Coworking spaces generally are based on an open office plan, yet there is wide criticism to this format as well. A review by Kim & de Dear in The Journal of Environmental Psychology in 2013 found that even if open offices do foster cooperation, communication, and sense of belonging, studies had found plenty of disadvantages. Disruptions are common, noise levels are high, and concentration, productivity and creative thinking often suffer.

However, another study in 2012 found that younger workers do not react to certain kinds of noise, such as laughter and conversation as negatively as older workers do. It remains to be seen whether these spaces function as the bastions of creativity they present themselves to be.

Coworking is a movement, not a space

I cowork in Bushwick, Brooklyn. In stepping out for coffee, I counted 22 people working at 1pm in an espresso bar, and 10 people at 3:30pm in a small café around the block. Coworking notwithstanding, cafés remain the go-to shared workspace for people all over the world. However, though they are technically sharing a space, people in cafés do not connect with each other.

That same afternoon at Bat Haus coworking space where I work from, we were 15 people all working in silence. And yet I used the word “we.”

Whether there is a real need to build a community in coworking spaces is certainly disputable, though that idea is much touted. According to my research in the field, the jury’s still out with regard to how coworking spaces relate to community building.

But let us dig deeper into this. In addition to providing a professional workspace, coworking is a movement. One of the early coworking spaces, Citizen Space, named some values that are now quoted in many sources, identifying coworking as having a core set of principles: “collaboration, openness, community, accessibility, and sustainability.”

The difference here is that cafés don’t have these values. The coffee house’s company brand might have an established set of values, but their patrons are customers of a company, whereas with coworking, participants are members of a social institution. If people can do their work anywhere, and they deliberately choose to cowork, it can be assumed they’re searching for something in the ephemeral category of community belonging.

The biggest indicator I see of the coworking movement’s potential is to be found in those packed cafés full of people on their laptops. Before we started coworking, we worked at home, in cafés, etc., so it stands to reason that others who work in cafés would want to join us, though that idea is driven by our own confirmation bias. Whether or not they feel the need to join a coworking space may simply depend on whether or not they know that coworking spaces exist.

Or, if it’s not just the pursuit of a sense of community, then “it’s the economy, stupid.”

Sociologists like Manuel Castells and Richard Sennett argue that work life is changing from long-term employment to constant shorter-term projects. Coworking can be regarded as a consequence of what Sennett calls the “projectification” of work consisting of a collection of smaller tasks and always-new projects. In “the new capitalism,” flexibility, downsizing, low loyalty and part-time work are a daily reality. As Sennett described it in 1994:

The word “job” in English of the fourteenth century meant a lump or piece of something which could be carted around. Flexibility today brings back this arcane sense of the job, as people do lumps of labor, pieces of work, over the course of a lifetime.

The coworking movement, one could argue, is based on this kind of shift in the nature of work, which has resulted in a change in attitudes. This shift means that as traditional work has eroded, more people turn to entrepreneurship and freelancing. These people number in the millions but are without any traditional workplace to work from or belong to. This has some surprising effects, Sennett observes:

One of the unintended consequences of modern capitalism is that it has strengthened the value of place, aroused a longing for community.

If there is any proof that community is central to coworking, it’s in the fact that the physical space offers amenities that can be easily found elsewhere (the wifi, coffee, and desk space that most coworkers would have little trouble procuring those elsewhere if necessary). It may be that social connections are not always needed for accomplishing work, and yet all grassroots coworking spaces talk about establishing a community as one of the first steps of coworking, and the chain coworking spaces feature it heavily in their marketing. Even if coworkers do not necessarily work together, socializing with others is a cornerstone of what coworking offers. There is more to coworking than its spatial, structural or architectural arrangements: it is a movement with values and a dedication to fostering community.

And yet there are some shared work spaces whose essential service is to provide access to things that the average person can’t easily come by. These are makerspaces, where one can get their hands dirty with 3D printers, laser cutters, and hardware. Out of these spaces spring communities of makers, tinkers, hackers and crafters. The ethos of their communities bears strong resemblance to that of coworking: members share values, involve themselves in contemporary work culture, and produce new things in the company of other people doing the same.

The rise of coworking spaces is tied to members’ twofold situation (a desire for community and a changing economy), while makerspaces’ reason for existence isn’t to address the needs of new workers, but rather to support a growing cultural interest in making.

In our contemporary context, makerspaces represent a return to the traditional work modes of artisans. But as coworking spaces, they are still in their infancy, and it remains to be seen how people will reimagine these institutions in the coming years.