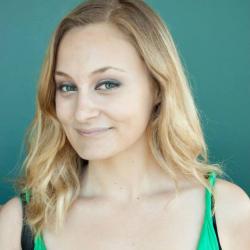 Rebecca Curl is a freelance wig and make-up artisan and writer based in Chicago. She recently received her BFA in Wig and Make-up Design and an English Minor from The Conservatory of Theatre Arts at Webster University. Becky is also a freelance contributor at Chicago Stage Standard and Peaceful Dumpling. When she's not writing or working in the theatre, Becky enjoys watching copious amounts of Saturday Night Live.

As a freelance artist within the theatre, the notion of collaboration is constantly drilled into your head. One weak or passionless crew member could wreak unimaginable havoc upon a production if he or she becomes unwilling to contribute equally to the project. The ability of a production team to work as a cohesive whole is crucial for the overall success of a production.

But while most theatre artists recognize the importance of collaboration within their workplace, collaboration usually just means teamwork — counting on everyone to fulfill his or her role. In most productions, everyone involved has a fixed role, and there is a divide between those who create the theatre and those who are the theatre. But a breed of theatre artists emerged to blur the lines between the creative and the created, and Devised Theatre was born.

Devised Theatre is a form of theatre that relies on creative collaboration. Rather than solely relying on a playwright to write a script, those who create Devised Theatre work together to create a production. Twentieth-century postmodern theatre artists paved the way for Devised Theatre through their strong beliefs in self-expression and fighting against what most of us recognize as “traditional theatre.”

The majority of theatre-goers expect to see plays written by playwrights, directed by directors, designed by designers, and acted by actors, but Devised Theatre throws those restrictive roles to the wayside. Each ensemble member is given the freedom to contribute to all parts of the production. An actor can voice an opinion on the lighting, while a designer is able to suggest what will make a scene stronger.

After years of working on traditional theatre productions, this kind of freedom is quite remarkable. We are all so often trained to find a path and stay on it. That makes our ability to collaborate within the workplace difficult as we encounter the inherent fear of crossing unfamiliar waters. Working on a Devised Theatre piece forces you out of your self-inflicted comfort zone and exposes you to the beauty of creativity among individuals who also value collaboration and creative-thinking. Allowing yourself to explore uncharted territories provides you with the chance to unlock new opportunities.

With such a strong sense of collaboration and community comes the inevitable differing of opinions and occasional creative conflicts. But this is viewed as part of the territory. Though working on a production with a set-in-stone creative process can help to prevent such conflicts, it can also cause members of the creative team to feel disengaged and disempowered. Differing opinions are not unwelcomed in Devised Theatre spaces — they are celebrated.

Devised Theatre’s main goal is to create original, exciting theatrical productions, which means that original and exciting ideas are required. All it takes is one person to present a new approach to spark an explosion of creativity. Collaborative work environments are not just where a bunch of people get to mix who normally would not; they are also places where the rules are rewritten.

So how does one “devise” theatre exactly? A Devised Theatre production begins with the formation of an ensemble. The ensemble usually includes a director (though the director will not necessarily fulfill the traditional directorial role), designers, actors, and other production team members. The ensemble then comes together to begin the discussion of their overall visions for their production. Each Devised Theatre production team will have its own methods for creating their pieces, but very generally speaking the process of devising theatre breaks down like this:

My own experience with Devised Theatre followed a similar process, and it was through this experience that I discovered an entirely new side of theatre that I had yet to engage with. I will admit that I am rather shy, so being in such a collaborative environment was intimidating, yet I also believe this experience helped me find my voice as a theatre artist.

I have sat through countless meetings where I felt no one in the room cared what I had to say because my department was not deemed important enough to the production as a whole — one time, I was even told as much. Those experiences made me question my desire to work as an artist in the theatre at all. But working on the first ever Devised Theatre piece that my university created during my last semester of college rekindled my love for theatre and reassured me I was on the right career path.

From our very first meeting, it was clear that each designer, actor, and production staff member was going to have a voice in the process, and each subsequent meeting proved this to be true. Yes, we had our share of conflicts and tense moments as certain ideas triumphed over others. From these conflicts, I was able to learn some things I would not have otherwise. I now know the most productive way to voice my opinions, how to gracefully accept an idea I am not immediately fond of, and how to conceptualize whether a new idea is going to be better for the ensemble as a whole. I have never felt as free as I did in that rehearsal space, sitting in a circle on the floor having three hour long discussions about art, culture, and society. I was finally in an environment where I was allowed to create art, rather than just produce it.

The most endearing aspect of Devised Theatre is the focus on throwing all conventional aspects of theatre out the door. Very few people believed in our production while it was in the works, and we were often the butt of jokes by those who were involved with our university’s more traditional productions. But we were passionate about what we were creating together, and it didn’t matter what our peers or faculty members thought about it.

Though I was not the most outspoken member of our ensemble, I still felt an incredible sense of community every time I stepped into the rehearsal space. I was not used to spending so much time in rehearsal, as the technicians are generally kept in their workspaces while the actors rehearse. This venture into their world opened my eyes to the physical and emotional struggles that actors go through on a daily basis that I was never blatantly aware of. Collaboration opens our eyes to experiences we’re not usually privy to.

In the end, our Devised Theatre piece, “A Reconsolidated Life,” was a hit among our peers and faculty members — even those who had serious reservations about our ability to create something using an unconventional organizational structure. We brought Webster University a theatrical experience they had never before seen, and proved not only that Devised Theater works, but that it’s a powerful artistic medium.

One mind can create beautiful work, but imagine filling a room with everyone’s creative intensity. Knowing what went into it, and what we got out of it, it made the production so much bigger than simply what was on stage. That is what collaboration is capable of producing. Devised Theatre and other collaborative arts teach us that there is a place for each of us within the creative working world and that people are hungry for opportunities to create things in new ways. The more often we are able to embrace it, the better we can innovate and experience artistic freedom. Embracing collaborative theatre is a step towards bringing back true creativity to our art.